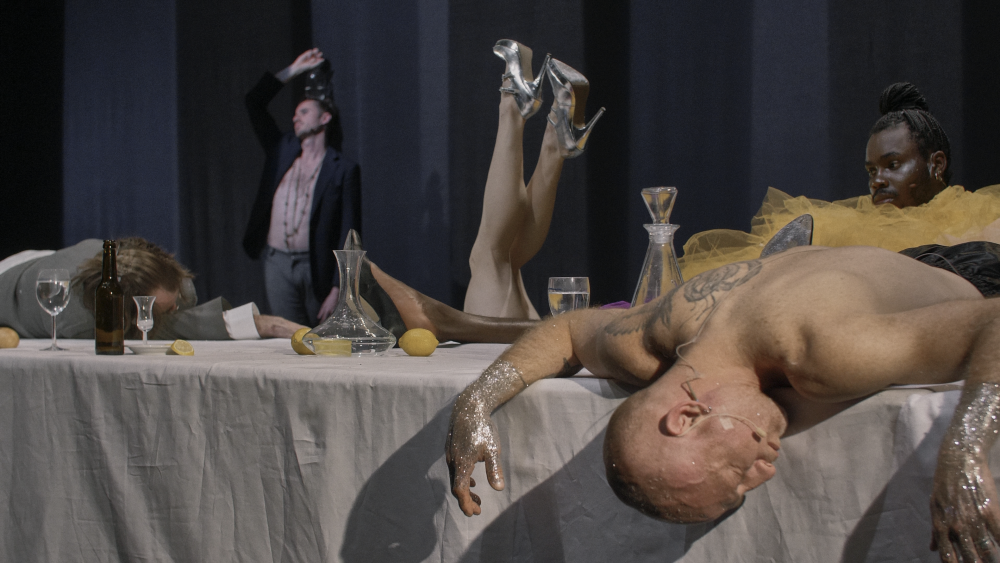 Is this complicated world easier to handle after having poured down a couple of glasses? Do the big questions and problems become manageable when looking at them through dazed senses? “What’s it all for?” Awardwinning director Eline Arbo takes on these questions in The Drunk Ones, the eponymous theatre film presented in the NITE Hotel in June 2020. The Drunk Ones is based on the text by Ivan Vyrypajev and has its theatrical debut in the Netherlands. While the performance was initially planned as a site-specific spectacle that would be presented at Oerol festival, the worldwide pandemic thwarted these plans. So, The Drunk Ones became one of the first performances which premiered exclusively at the NITE Hotel as well as on the digital version of the Oerol festival. Arbo and the Noord Nederlands Toneel + Club Guy & Roni had the possibility to specifically design the performance for the digital environment which generated a high-quality theatre film that could be enjoyed from your own sofa. With 5 actors, 3 dancers, and 1 musician, Eline Arbo let audiences believe in a better world for at least one night when her characters were able to find the answers to life’s biggest questions at the bottoms of their glasses. “I have noticed that my generation wants to create a better world but finds it hard to realize this goal.” The actors on stage suddenly seem to be able to present solutions to this problem and let it appear to be easy to find answers without any doubts and with full conviction. In the character’s drunk search for God, love, or utopia, Arbo manages to transfer this conviction to the audience while creating a comical, dancing, musical, and cinematic reading of Vyrypajev’s rather philosophical piece. This year, these big existential questions have become more relevant and discussed than ever which made Arbo’s performance highly enjoyable for the online audiences of the NITE Hotel. However, The Drunk Ones is not only a pleasant distraction of everyday life but also offers food for thought. You never really know whether wine strengthens or restrains a sharp sense for understanding the big picture. Some things suddenly seem to be so simple while, at the same time, you’re not able to put one foot in front of the other anymore. But in the end, the audience is left with the question that might also be understood as an invitation: Shouldn’t we always try get through life with a little bit of ease like the characters in The Drunk Ones show us? Shouldn’t we always take a step back first and try to tackle the ‘big questions’ through the simple perspective of a drunken one?